(Obviously spoilers for the Chimera Ant Arc of Hunter X Hunter, so turn back now if spoilers aren’t your thing.)

I notice that whenever the discussion of the Chimera Ant Arc of Hunter X Hunter comes up, people seem to talk about the second half more than the first. Not that it isn’t understandable, since the second half is filled with most of the memorable moments and possibly the richest thematic exploration in the series. The second half deserves every bit of praise that it gets, but I feel that the first half is often overlooked when I personally think that it succeeds in a different way. While the second half focuses on developing the characters and showing how the arc represents the themes of humanity, the first half is much simpler and it uses that simplicity to its advantage. Today, I’m going to be running down what makes the first half a fantastic precursor to what’s to come.

What makes this first half great in my opinion is how it goes about introducing the chimera ants. At first, we don’t really think much of them, as they appear incredibly small, harmless and are taken down with ease by Kite, but Togashi plants the seeds of how much of a threat they are to our protagonists by a simple warning from Kite to Gon and Killua. Not long after this, we see the chimera ant queen for the first time and we immediately begin to question our expectations as she begins to feed on other creatures, which results in her giving birth to this strange lobster looking monstrosity, and what happens afterwards? Her new servant brings her food in the form of two human children, Kurt and Reina, and after this, Colt is born. The first humanoid chimera ant that we see, and also the point where we start to see that these are no mere insects. 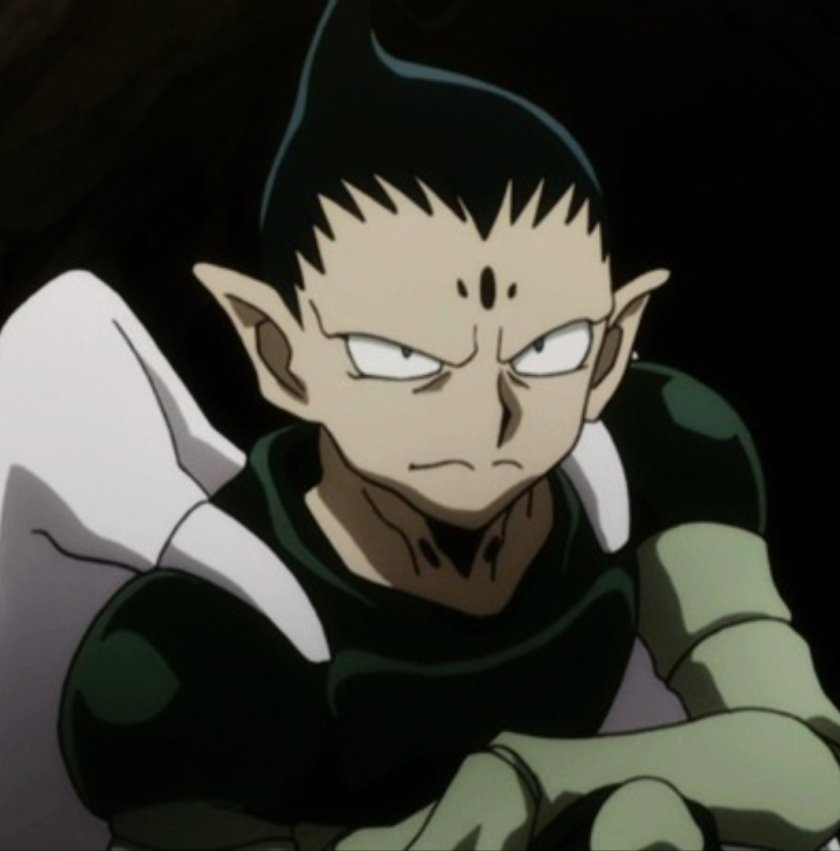 From here, the story becomes one huge round of escalating stakes after another. We have it set in our heads tht these ants are not to be taken lightly, and we continue to see that as the story goes on, and this is where I want to speak about why this is my favorite part of the first half.

Have you ever imagined what a zombie apocalypse would be like? It would honestly be pretty scary if we let something like that happen. A rapid growing disease that can get around very easily as humanity slowly falls apart and a new dominant species takes over is a horrifying thing to think about. This is what I feel the first half of the Chimera Ant Arc is for the most part. Just one huge zombie apocalypse, only what I find even scarier is how easy it is for the ants to evolve and adapt to their situation against humanity. 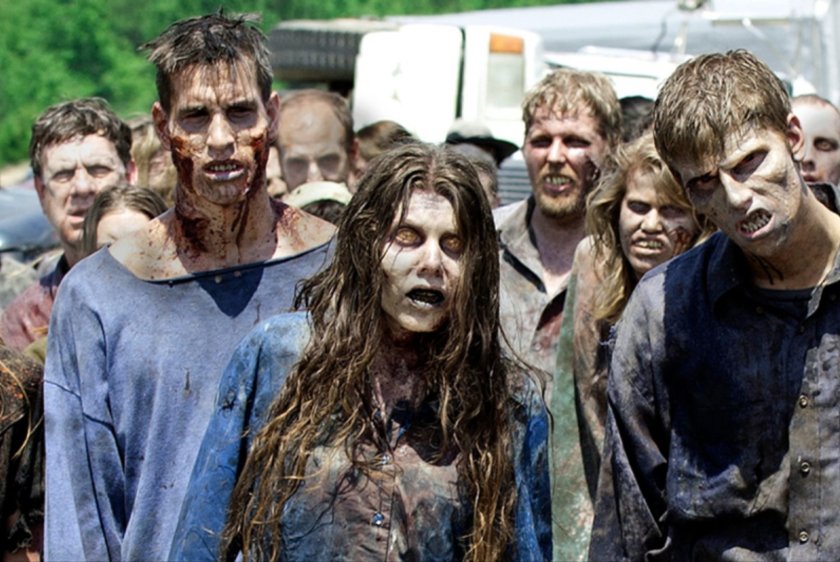 When I say they adapt quickly to their situation, I really fucking meant it. Whenever the humans try to use weapons, the ants figure it out and try to use their methods against them. Then the hunters get involved, and for a moment it seems like humanity may have the upper hand, but eventually the ants gain the ability to use Nen. It gets to the point where the greatest of the greats need to be brought in, including Isaac Netero himself, but then comes the birth of the Royal Guards. Togashi keeps on giving the humans one advantage only to make it all meaningless when the ants get a bigger advantage.

Experiencing this for the first time was intense and a little frightening. Yeah, Togashi actually managed to make me scared of what would happen, and you want to know the funny thing about that? I was spoiled about what would happen by the end of this arc and this statement still held true. The fact that Togashi even managed to pull that off should show his massive potential as a writer.

The strategy in the fights that HxH is known for is also escalated here, going from just mere fights to all out war between the two species. The fights that involve Gon, Killua, and Kite are just a smaller part of a bigger whole. We get to see both sides of the conflict as they each try and gain the upper hand, and when even get to see characters that went as far back as the Hunter Exam get in on the action. I think the biggest example of all this is how the Phantom Troupe is incorporated into the arc. It may just be for a short while, but seeing them join in on the fight shows that this is a war where practically everybody is involved.

This part is more about the Chimera Ant Arc as a whole than just the first half, but the fact that so many people, from the Phantom Troupe to the Zoldyck Family to the Chairman of the Hunter Association and so many more are here really emphasize that this is supposed to be treated as this epic climax for HxH. There are other factors that play into this as well, as the chimera ants are the strongest antagonists the series has had so far, the score of the anime and imagery are at their most memorable, and we also get some of the most exciting and heartwrenching moments that the series has ever had thus far.

When I said at the beginning that the first half doesn’t have as many emotional and memorable moments as the second, that wasn’t entirely true. There are some moments worth remembering like when Gon beat Knuckle, when Killua broke free from Illumi’s control, and when Gon saw Kite for the first time after Pitou killed him, but there is one scene in particular I want to talk about. Talking about the second half for a moment, what makes that part of the arc so memorable, at least to me, is the lengths that Togashi is willing to go to show every aspect about humans, both good and bad, and prove that we are not so different from the ants. The seeds for all this was planted from the start in probably one of my absolute favorite moments of HxH ever. 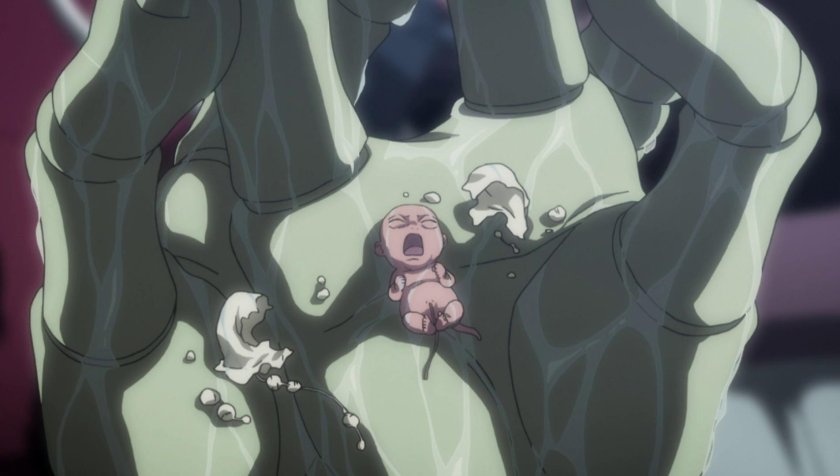 During the death of the queen, Colt’s character takes a turn that I wasn’t expecting at all. The way this scene is portrayed at first is somber, but by the end of it, it becomes hopeful for Colt. After watching his queen die and him not being able to do a thing about it, Colt ends up breaking down in tears. That is, until he discovers a baby chimera ant and he vows to protect it with his life, partially in service to his deceased queen and partially because of him remembering who he was as a human. Like the little boy protecting his sister. Then, something interesting happens.

Morel walks up to Colt wielding his giant pipe and for a moment, we think he is going to do something terrible. However, he does something that made my heart melt. Instead of outright killing them both like we expect, he instead vows to protect them both, albeit only if they promise never to hurt humans ever again. He says this all with a proud smile on his face and tears in his eyes, and seeing the look of happiness and astonishment on Colt’s face is something that I will never forget watching for the first time.

This scene says and does so many things in such a short amount of time that it’s honestly incredible. Colt showing his humanity for the first time and the underlying darkness beneath Morel’s warning is a perfect showcase of what the arc was to cover later on, it made Morel one of my favorite characters, it made Colt one of my favorite chimera ants, there is just so much about this scene that I love that it’s hard for me to put into words. It is a perfect example of Togashi at his absolute best and not only is it my favorite scene in the Chimera Ant Arc, but also my favorite scene in all of HxH. Yeah, I truly believe it is that good.

The first half of the Chimera Ant Arc should really be talked about more. This could be just me, but there is a lot to love here. It does a great job at establishing the the threat of the ants, it has incredible feelings of tension, it sets up a lot of the themes and messages that would be explored during the second half, and it has one of the most underappreciated scenes in the entire series. I hope I was able to shed some light on what I like about it and hopefully get a conversation going about it too.

Thank you all for your time.